Koh Sichang is an island off the coast of Si Racha and less than an hour’s drive from Pattaya. To journey to a remote island is something that can captivate the imagination of anybody. While Thailand is renown for its many exotic islands, this particular location in the Chonburi district and northwest of Rayong is virtually unknown and rarely mentioned in most guidebooks.

The first marvel on my journey was the realisation that neighbouring Si Racha is the birthplace of the famous Sriracha chili sauce that I buy in large amounts at supermarkets in America. It’s a short drive through this major manufacturing centre to reach the docks and purchase a ticket to Koh Sichang at around B50. Unfortunately, I had no time to stockpile my favourite condiment.

Koh Sichang is a popular weekend excursion for locals in the Si Racha area, yet barely seen by Western tourists. To get here, the boat ride was comfortable but sometimes bumpy, and I sat too close to the entrance, which meant frequent splashes of seawater. This was no problem for me as I’m crazy enough to actually enjoy the occasional cool splash down. 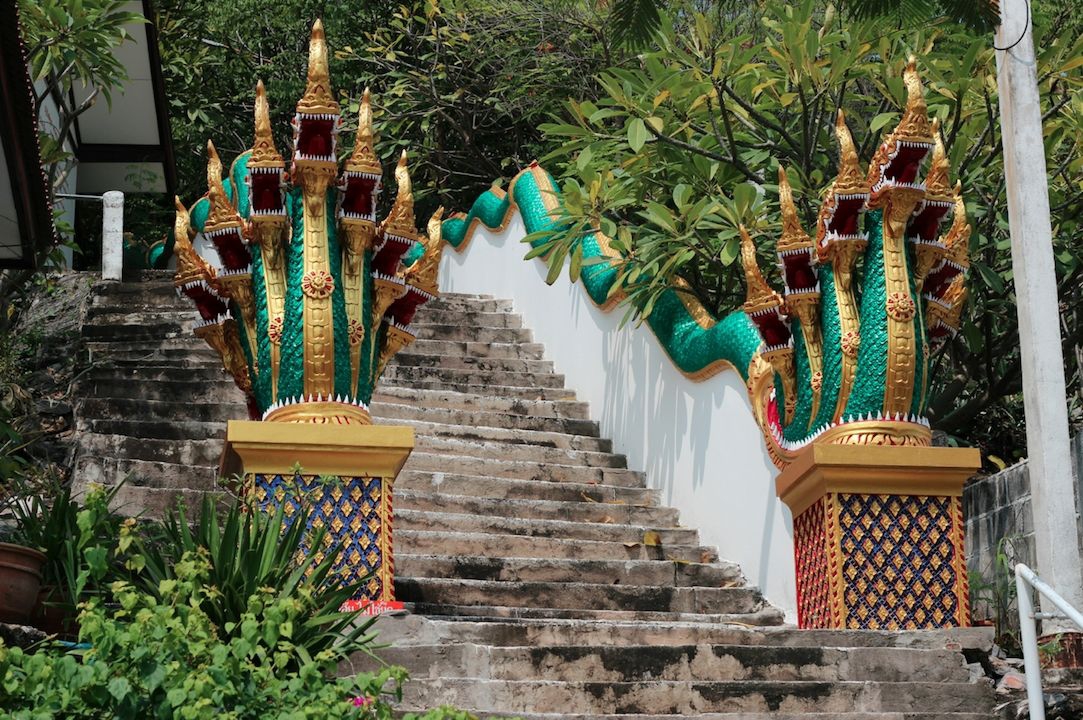 The first sight upon disembarking is the ancient Chinese monastery of San Jao Paw Kao. Locals explained to me that there is a legend that the Chinese inhabited the island thousands of years ago, and it’s said that this monastery was built in the1600s. It features an amazing view from the summit, and my later expedition to the temple revealed many old Chinese artifacts and statues.

A second monastery is also visible near the docks, and it’s the Wat Tham Yai Prik, also perched on the side of the mountain. Unlike the Chinese counterpart, this sacred area was constructed within the last couple of decades, although the region still feels very ancient.

From my resort, I took a Tuktuk up to the Wat Tham Yai Prik, where I had the opportunity to explore this mystical area. It was especially hot as the mountain faced the morning sun, and I was reminded about the importance of good sun block. In addition, as with other mountainside temples, this hike is not for people out of shape, as it featured a staggering amount of stairs to reach the vista near the top.

The way to the top was clear, as it was marked by a giant pair of vicious Naga dragons, a mythical multi-headed beast that tends to guard Buddhist monasteries around Thailand.

This monastery also featured an abundance of caves chiseled into the side of the mountain. These are special meditation areas where Buddhist monks can concentrate in a quiet, cool environment. With a local monk’s permission, I carefully traversed one such cave, and discovered a muddy, but oddly comfortable dwelling with a small golden Buddha shrine hidden in the shadows at the back of the cave. 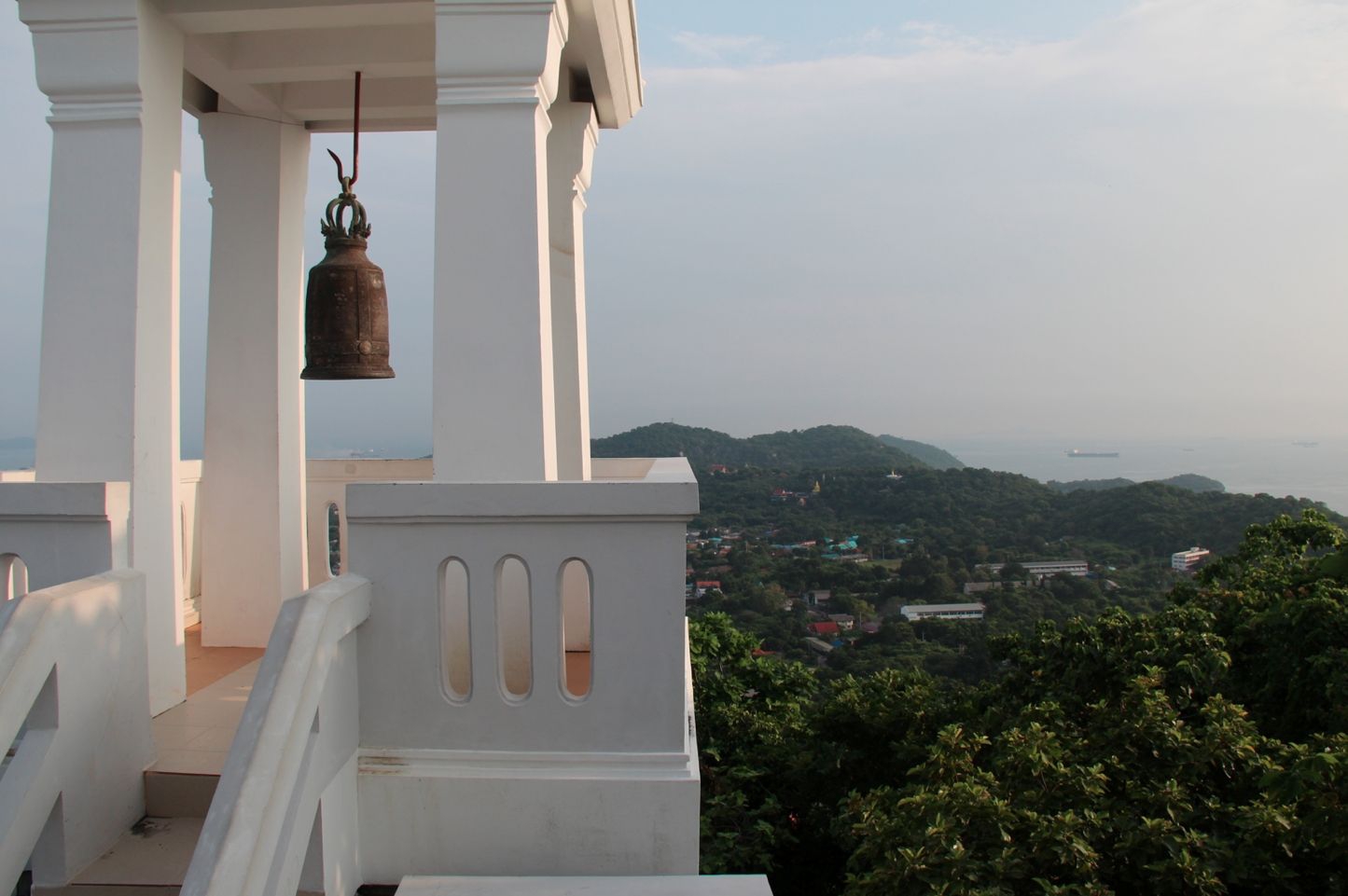 While the shrines are the most noticeable feature of Koh Sichang, the historical royal palace and gardens is what attracts most people to the island. Near the centre of the island is a lush green park that visitors can wander to their hearts content. What makes this park special is that it’s an historical area where one of Thailand’s most revered kings—Rama V or Chulalongkorn—began development of a large royal getaway.

For those uninitiated, Chulalongkorn remains one of the most important symbols of Thailand, and so it’s no surprise that his former residence is considered an historical—or even scared—location. Rama V is credited with the preservation of Thailand (then Siam) against foreign occupation at a time when French Indochina, the British Empire and other Western powers desired colonization, expansion and invasion of Southeast Asia.

This development of Rama V’s summer escape ended when the Franco-Siamese war erupted in the late 19th century. Koh Sichang was occupied by French troops until the war ended that year in 1893. After the French troops left the island, the King no longer felt ambition to continue with the development, and the royal palaces and temples were abandoned. But the park is now an excellent location for a daytrip to observe the many interesting buildings.

The capstone of my journey across Koh Sichang was another mountainside location, but this time on the far north end of the island. The region was almost overgrown by jungle, and it required a hearty motorbike in high gear to reach the summit. The reward was a marvelous overlook from the Buddha’s footprint, which is a small temple with a large bell that can be rung for good luck before you leave. 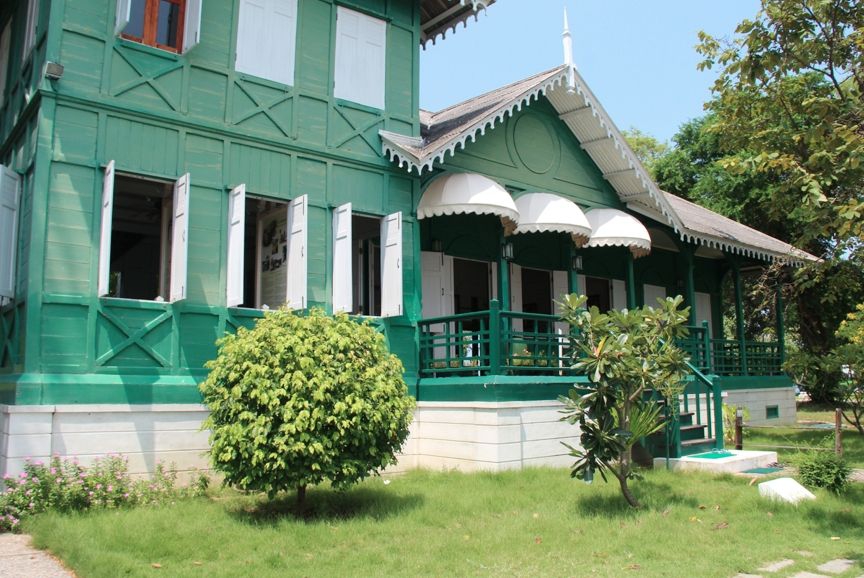 After a day of visiting all of the historical monuments, the next best destination was a trip to one of Koh Sichang’s amazing beaches. One of the best sunsets I’d ever seen occurred at the Tam Paang beach, a nice location situated conveniently next to a resort and outdoor restaurant.

During most months, this area of Thailand becomes fairly hot, but the temperature is milder in the evening, and the wind from the ocean further makes the coastline an excellent place to cool off. The water seemed fairly quiet, without enough waves to surf, but excellent for a swim.

Koh Sichang was one of those rare locations where you can feel like an explorer. The town itself is very quaint, and there is a surprising lack of tourists. Even as I explored the more popular sights on the island, I came to believe I was the only Western guy in the region. As a result, if you do not speak Thai you may have some difficulty with communication. Fortunately, I found a taxi driver who spoke enough English that I could successfully navigate the island with her help. Koh Sichang is, overall, one of the more interesting and unique places you can see while staying in Pattaya or any other location in southern Thailand. 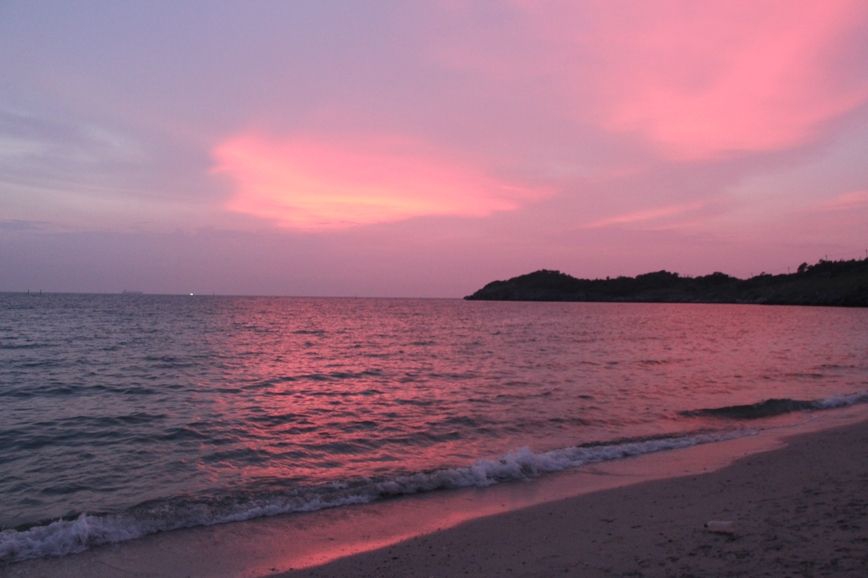